Note: One of the most impressive regions of the summer sky is the large area just south of the bright star Deneb (α-Cyg, mag 1.33) and where one will find two massive emission nebulae, namely the North American Nebula (NGC 7000) and the Pelican Nebula (IC 5067 and IC 5070), separated by a thin dark dust lane. The Pelican Nebula lies at a distance of 1,900 light-years away and spans 15 light-years in diameter. It is often depicted in two forms; the larger widefield version encompasses the complete nebula and is designated as IC 5070 whereas a smaller region with protruding tendrils and near the neck of the "pelican" is also often referred to by the same name but under a different designation within the IC catalog (IC 5067). The rich emission is associated with star formation and it is expected that this area of the sky will look dramatically different in a few million years owing to a plethora of new stars and a significantly reduced amount of hydrogen.

Note: For a wider field of view of the Pelican Nebula and which is under a different code, namely IC 5070, click here. 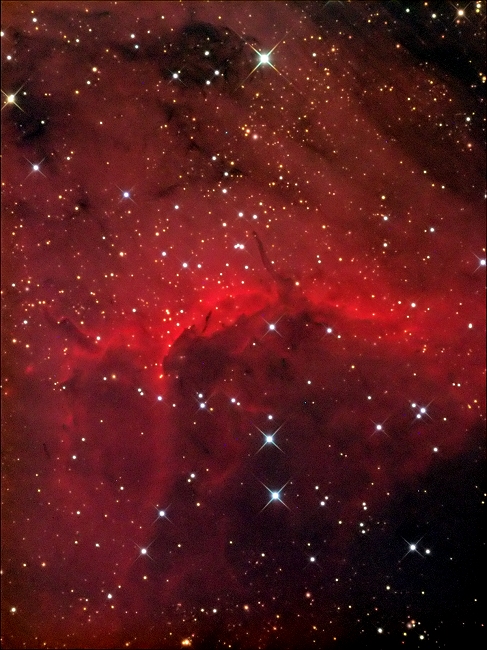