Note: Open cluster M41 in Canis Major is a large bright cluster (magnitude 4.5) which is visible with the naked eye under dark skies. It is comprised of approximately 100 member stars including four prominent bright yellow-orange stars (mags 6.91 to 7.80) as well as many others between magnitude 7 and 10. This rich cluster is widely distributed across a field spanning 38 arc-minutes including a notable core involving many bright member stars. It has been estimated to be approximately 190 to 240 million old and characteristically includes a few yellow giants as indicated by the image below. This cluster lies at a distance of 2300 light-years away and spans another 25 light-years in diameter. The cluster may have first been observed by Aristotle in 325 BC and certainly observed and catalogued by Giovanni Batista Hodierna around 1654 and later by Messier in 1765. M41 lies four degrees due south of Sirius in the constellation of Canis Major and is best observed during winter crossing the meridian in the evening. 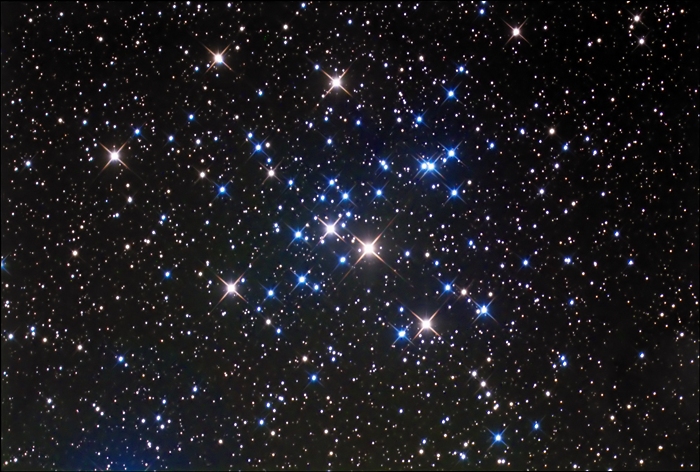