Note: Open cluster NGC 2682 is one of two major open clusters in Cancer (along with M44). It is one of the oldest known clusters with estimates ranging from 3.2 to 10 billion years of age (a recent study suggests 4.0 billion years of age). It has an apparent diameter similar to that of the full moon and is comprised of approximately 500 member stars including 200 white dwarfs. The dominant member stars include SAO 98178 (mag 7.83) lying to the northeast and several stars to the south whose magnitudes range from 9.77 to 10.8 (all yellow giants are characteristic of the advanced age of the cluster). The cluster was discovered by Johann Gottfried Koehler prior to 1779 and independently rediscovered and catalogued by Messier in 1780. The cluster lies than two degrees from Acubens (α-Cancrii, mag 4.25) and lies overhead around midnight during winter.

Note: For an earlier version from 2007 taken under better skies but a less-sensitive camera, click here. 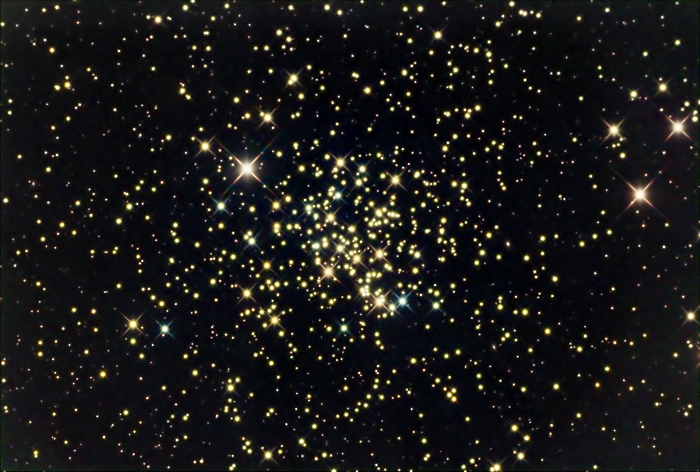