Globular star clusters are a symmetrical collection of ancient stars (up to a million such stars). Recent estimates indicate that about 150 globulars exist in the Milky Way with only three being readily visible to the naked eye (the Andromeda Galaxy has been estimated to contain approximately 500 globular clusters). Since most of the globular clusters are more common in the southern hemisphere, scientists have deduced that our sun must lie away from the galactic core of the Milky Way. One of the most beautiful such globular clusters is M13 in Hercules.

Note: The Great Cluster in Hercules was first observed and described by Edmond Halley (1714) and later catalogued by Charles Messier (1764). It is believed to be comprised of a few hundred thousand stars and has been measured to lie 25000 light years away and with an apparent diameter of approximately 145 light years. This cluster also represents one of the targets where a 1974 radio message was transmitted from Arecibo in the hopes of contacting an extra-terrestial entity.

As with all globular clusters, the Great Cluster in Hercules is best observed using narrow-field high-power views where, for example, the white and hot member stars provide a stunning view and similar to a large collection of diamonds against the background sky. Owing to its naked eye visibility, the cluster can be easily located lying between η- and ζ-Her and is best observed during late spring and early summer when it is directly overhead around midnight. A few degrees to the southwest of M13 lies another stunning globular cluster within Hercules, namely, M92 (NGC 6341). 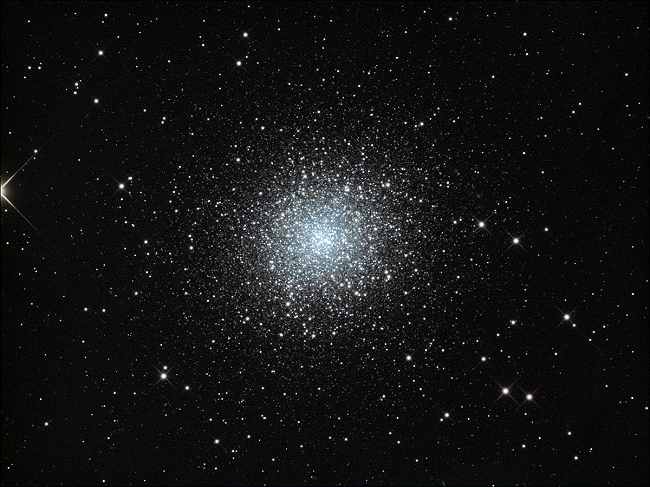