A large number of planetary nebulae can be found within the NGC and IC catalogs and are available elsewhere on this site (see here). As illustrated by the image below, planetary nebulae are beautiful objects to look at thanks to the glowing and colourful gaseous shrouds which make their planetary appearance and colouration possible as a result of stars having exhausted their nuclear material and having reached the last stages of their life. Some of the more exotic planetary nebulae include the Cat's Eye (NGC 6543), the Saturn Nebula (NGC 7009), the Ghost of Jupiter (NGC 3242) and the Owl Nebula (M97).

George Abell's examination of the Palomar Observatory Sky Survey in the mid 1960's yielded 86 planetary nebulae which have proven to be an observer's dream challenge, for many of these celestial objects are not only very faint in magnitude even under very dark skies but are also relatively large with dimensions often measured in minutes in lieu of seconds. Later analysis of Abell's catalog revealed that at least four of these objects, namely Abell 11, 32, 76 and 85, are not planetary nebulae at all. For the avid observer, an O-III filter is highly recommended in order to have any hope of visually detecting these elusive wonders. Abell's planetary nebulae have been classified under a web page of their own on this site (see here).

Note: The image below, commonly referred to as the Dumbbell Nebula, is the 27th entry in Charles Messier's famous catalog of deep sky objects and which he first observed in 1762. Aside from being the first planetary nebula to have ever been observed, it is certainly the brightest such object in the sky with a visual magnitude of 7.4 and with its dim halo reaching out 15' in diameter or precisely one-half of the moon's apparent diameter! Estimates of its distance vary rather widely and range from 490 to 3500 light-years.

As with all planetary nebulas, a "central" star is responsible for the impressive and colourful shrouds of gases, for it represents the source of the massive stellar explosion. In this particular instance involving M27, the 13.5 magnitude star at the center of the shroud is the source of the gaseous envelopes that surround it and which is suspected to have exploded 3000 to 4000 years ago given the current rate of expansion of the central core. 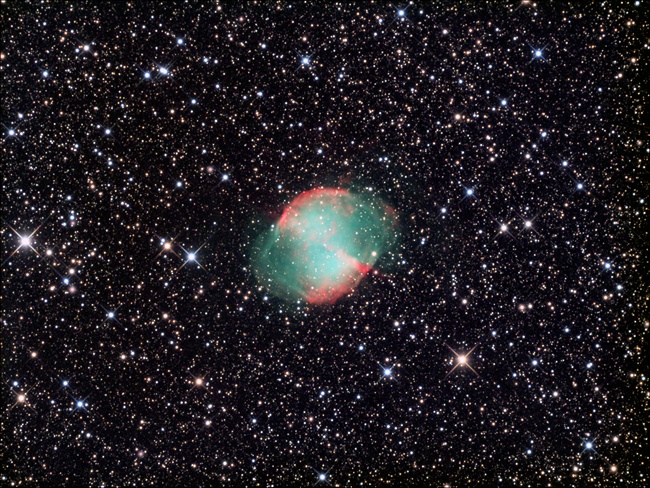