Open star clusters are widely distributed in the universe and represent a loose collection of stars which number from a few dozen to a few hundred stars. Perhaps the three most famous such open clusters are the Pleiades (M45) in Taurus, the Beehive (M44) in Cancer and the double cluster in Perseus. They are all characterized with a handful of hot and white prominent stars and nebular material surrounding these stars.

Note: The open star cluster M29, discovered by Messier and catalogued on July 29, 1764, consists of seven bright members whose shape crudely resemble the Pleiades (M45) and/or the Big Dipper where four of the members form a rectangle and the other three form an arm to one side. This cluster lies in the very rich constellation of Cygnus and, therefore, has the rich Milky Way as background. Estimates with respect to its distance vary from 4000 to 7200 light years and its age has been estimated at a relatively young 10 million years. The brightest members of the cluster (spectral class B0) have been determined to be 160,000 times brighter than our sun!

The cluster is best observed using low-powers during late summer and early fall when it is directly overhead. It lies less than two degrees from the bright binary star system γ-Cyg (aka Sadr, mag 2.2) but may be a challenging object to locate due to the rich surrounding Milky Way (interstellar dust is believed to mitigate the overall brightness of this open cluster). The region is extremely rich in emission nebulosity and as indicated by the image below. 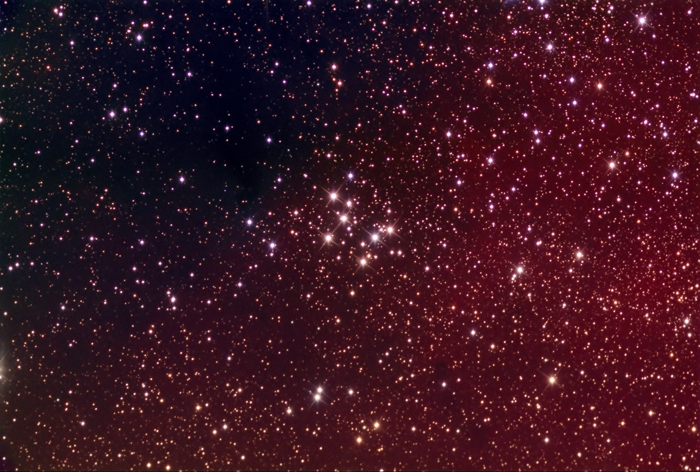