Note: The open cluster NGC 7654 depicted below lies between β-Cas and ι-Cep covering an area approximately 16'x16' and with an apparent diameter of about 20 light-years across. The cluster also lies 35' from the well-known Bubble Nebula (H-II emission nebula) and is generally in a rich portion of the sky due to the surrounding Milky Way. Distance estimates for this 35 million year-old cluster vary dramatically and range from 3,000 to 7,000 light-years with a number of estimates centered around 5,000 light-years. As indicated by the image below, NGC 7654 is quite rich with an estimated 190 member stars which are dominated by two yellow giants (mag 7.8 and 8.2) as well as the main sequence star SAO 20597 (mag 9.0). The cluster was first observed by Charles Messier in September, 1764 and which he entered in his famous catalog as the fifty-second entry (M52). This circumpolar open cluster lies at the midpoint between Cepheus and Cassiopeia (as noted above) and is best observed during fall and winter when it is due north of the celestial pole in late evening. 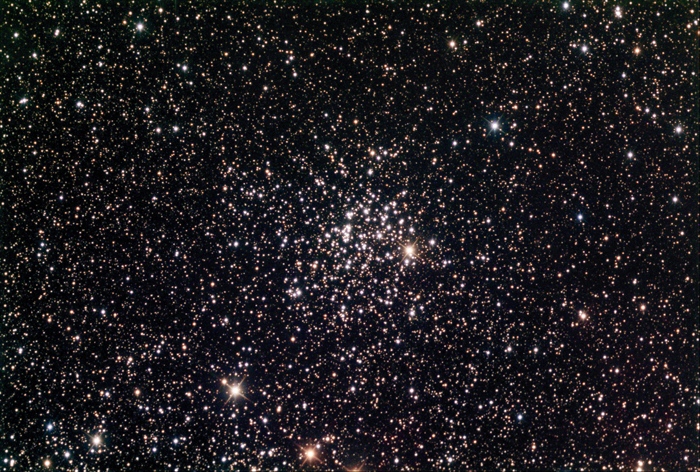