Although occultations can occur in a variety of ways, the heavenly body most often involved is our moon which inevitably will occult (or eclipse) background stars, other planets as well as asteroids. The study of occultations is important, for example, for the study of the moon's limb and its profile thanks to the grazing of lunar features such as mountains.

What is perhaps more interesting but not as frequent is occultations involving the moon and one of the planets. Typically the planets involved are Venus, Mars, Jupiter and Saturn. Due to the great magnitude difference between the moon (any phase) and any of these planets, the photography of these events can be challenging.

Without doubt, the most stunning example of the moon occulting another body is that involving the sun which, of course, leads to a solar eclipse. This special example of an occultation is available elsewhere on this site.

Note: Venus is only second to the moon when it comes to the brightest object visible in the evening sky and, in fact, is also visible during the day naked-eye when sufficiently away from the sun. For this particular occultation involving the moon and Venus, the latter was characterized with an apparent diameter of 26.39 arc-seconds, a magnitude of -4.4 and a phase of 44.1% whereas the waxing 3.5-day old crescent moon was at magnitude -7.9 and with a phase of 14.6%. A Baader UV-IR/Cut filter was used to limit the FOV to the visible spectrum.

Note: The human eye has a tendency to focus at a distance of 400 feet when focusing for "infinity". As a result, many celestial objects which are visible during the day can become a challenge due to the eye's default focusing for infinity. When the moon is near a celestial object of interest, however, the eye will easily focus properly for "infinity" when looking at the moon and which in turn will permit for the easy identification of the (neighbouring) celestial object of interest such as Venus below in broad daylight (bottom left corner of the image below). 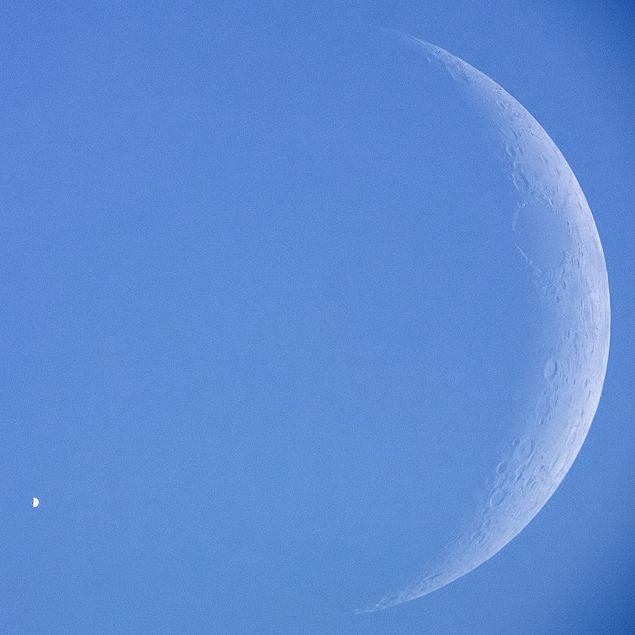