Globular star clusters are a symmetrical collection of ancient stars (up to a million such stars). Recent estimates indicate that about 150 globulars exist in the Milky Way with only three being readily visible to the naked eye (the Andromeda Galaxy has been estimated to contain approximately 500 globular clusters). Since most of the globular clusters are more common in the southern hemisphere, scientists have deduced that our sun must lie away from the galactic core of the Milky Way. One of the most beautiful such globular clusters is M13 in Hercules.

Note: The globular cluster M71 in Sagitta is regrettably often overlooked and in spite of its rich appearance. There was some dispute as to whether this cluster was an open or a globular cluster but the general consensus at the moment leans towards the latter classification. Lying at a distance of 13,100 light-years away and spanning another 27 light-years across, this (loose) globular cluster is comprised of a handful of bright member stars near the core with the brightest star being magnitude 12.1. With an apparent diameter of 7.2 arc-minutes, this cluster can be detected using binoculars under dark skies and is certainly within reach using modest-sized telescopes.

As with all globular clusters, NGC 6838 in Sagitta is best observed using narrow-field high-power views where, for example, the white and hot member stars provide a stunning view and similar to a large collection of diamonds against the background sky. The cluster is easy to locate by looking at the midpoint between γ- and δ-Sge (mag 3.50 and 3.82 respectively) and is best observed during late summer and early sprint when it is directly overhead around midnight. A few degrees to the northeast lies the famous Dumbbell Nebula (M27) in Vulpecula. 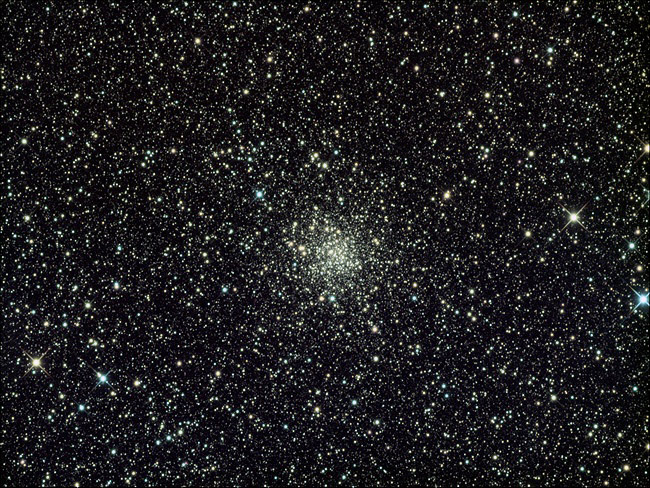