Although only 227 Wolf-Rayet stars have been identified to-date, they are a delight to both observers and photographers, for they produce stunning bubble nebulae around luminous and massive stars nearing the end of their evolutionary cycle. First noted by French astronomers Charles Wolf and Georges Rayet in the mid 1860's, these stars are characterized with unorthodox spectra with broad emission lines strong in ionized helium, carbon, oxygen and nitrogen (these stars are further subdivided into WN and WC stars depending on a stronger nitrogen or carbon emission line respectively).

These very luminous stars are also very short-lived. During the normal phase of their life cycle, the interstellar medium disperses stellar material, thus forming an interstellar bubble. When the star has then finally reached the end of its life cycle, a strong stellar wind now helps in the rapid depletion of stellar mass and which accumulates in the form of an (emission) nebula residing into the previously formed interstellar bubble with the WR star behind this sequence of events being often quite visible (particularly in photos).

Wolf-Rayet stars are characterized with cores whose mass is only 10 to 20 solar masses and temperatures which vary between 25,000 and 60,000 degrees Kelvin. The Seventh Catalogue of Galactic Wolf-Rayet Stars boasts a short but complete list of 227 entries as of 2001. Approximately 100 of these stars are found in the Large Magellenic Cloud; they rarely occur in clusters and there is a suspicion that they may be precursors to supernovas. These bubble clouds can span large portions of the sky (20-30 arc minutes); they can have a high surface brightness; and many are within easy reach of modest amateur telescopes.

Note: The Bubble Nebula in Cassiopeia is one of the most dramatic emission nebulae visible in the northern hemisphere. Lying at a distance of 7,100 light-years away and spanning six light-years in diameter, NGC 7635 is quite bright with a magnitude of 7.0. The star in the middle of the bubble (see image below), BD+602522, is responsible for this stunning sight, for this very hot star emits so much UV radiation that it is able to also heat and excite the surrounding dust and gas, thus emitting its own radiation. The Bubble Nebula is less than 30 arc-minutes away from M52, one of the primary open clusters in Cassiopeia, and is best observed during fall and winter when it is furthest north of the celestial pole. For further details including a stunning HST photo, click here. 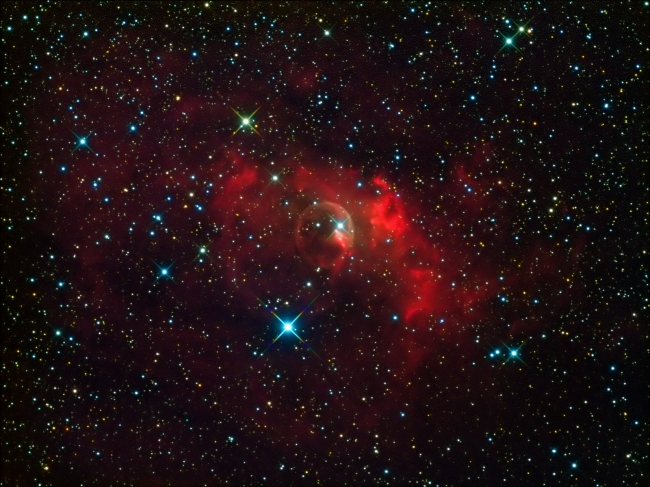