Supernova remnants represent the residual effects of massive stars which have reached the end of their life-cycle, including a massive stellar explosion as a grand finale, and which leave behind them spectacular gas clouds and stellar remnants (neutrinos) which cover multiple full moons in width across the sky. Regrettably, for residents of the northern hemisphere, only four supernova remnants (SNR) are visible and, more specifically, the Crab Nebula (M1) in Taurus, the massive Veil complex (NGC 6960, 6974, 6979, 6992, 6995 and Simeis 188) in Cygnus, the Jellyfish Nebula (IC 433) in Gemini and Simeis 147 (aka Shajn 147, Sh 2-240) also in Taurus. The most recognized supernova remnant is perhaps the Crab nebula in Taurus which is believed to have exploded in 1054 AD as documented by Chinese astronomers of the time whereas CTB 1 and Simeis 147 are especially dim and represent some of the faintest objects in the sky.

Note: An area approximately three square degrees just to the south of ε-Cyg (mag 2.46) hosts one of the most dramatic examples of a supernova remnant. Commonly referred to as the Veil Complex due to multiple large areas of nebulosity, the area is characterized with an extended remnant to the east comprised of NGC 6992, 6995 and IC 1340; a central remnant (image below) comprised of NGC 6974, 6979 and Simeis 3-188 (Pickering's Triangle); and the western remnant surrounding 52-Cyg (mag 4.22) and catalogued as NGC 6960. Herschel was the first to discover the various nebulosities in 1825 and who treated them as independent entities and, hence, for the various NGC assignments. The Veil complex is 1400 to 2600 light-years away and spans another 50 light-years in diameter. It is very difficult to see naked eye but trivial with a modest telescope and an O-III filter which reveals tremendous filamentary detail and interwined wisps of nebulosity. It is believed that this SNR is a from a star which exploded 5000 to 8000 years ago.

Note: Simeis 3-188 was discovered by Williamena Fleming and who decided to name the nebulosity after her supervisor and astronomer William Henry Pickering (1858 - 1938). It now bears his name and is commonly referred to as Pickering's Triangle. 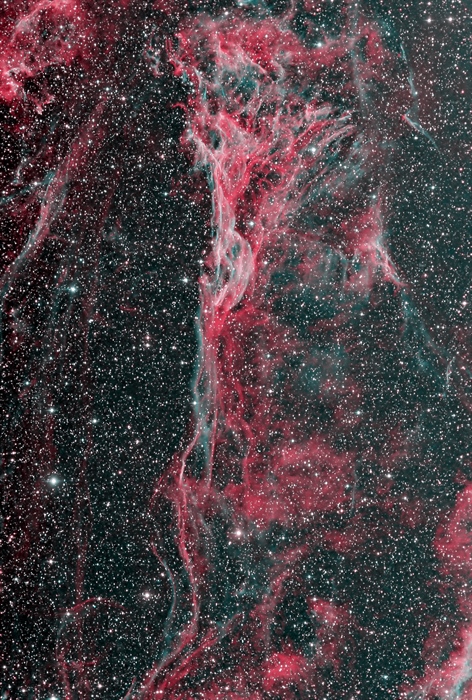 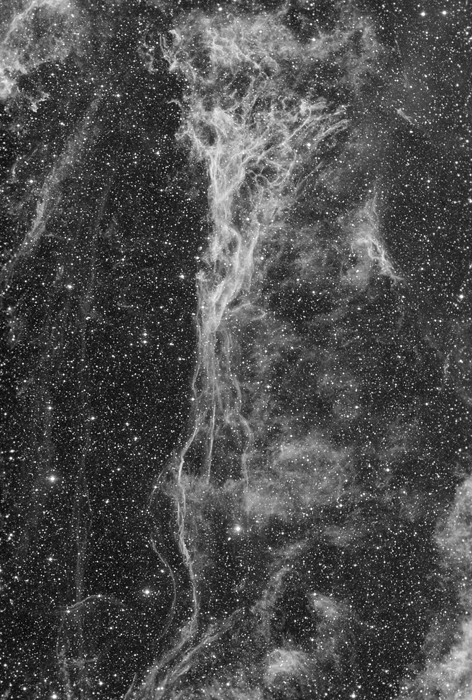